It is truly a small world – Dasha and I met in Sydney just a few weeks ago, although we both had been living in Kiev for years. We know the same people and speak the same language, but got to know each other on the opposite side of the world!

Dasha is a part of the Cruise Liner crew. And the reason she became a part of it was Love. She followed her boyfriend, and here she is – travelling the world and exploring new horizons. 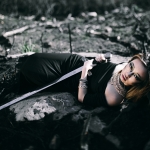